Home Jerry's Blog Update of Some Publicity for the Book

Update of Some Publicity for the Book

An update on some recent exposure for DOUBTING THOMAS (as of 3/4/15):

Great show everyone.
Thank you Jerry and Mark.
Here is the podcast.

Thursday, February 19th. Bible Breakfast Club with Pastor Ron Miller on WBFI in Kentucky. The podcast can be heard at: www.bethelfmi.org

I am pleased to inform you that your book has been recommended in the March edition of my monthly report on new non-fiction and fiction. (Publicists should check to see if more than one title of theirs is noted.)

I love reading history and one of my great favorites from American history is Thomas Jefferson. Addressing a group of scholars, John F. Kennedy said “I think this is the most extraordinary collection of talent, of human knowledge, that has ever been gathered at the White House – with the possible exception of when Thomas Jefferson dined alone.”  One of the enduring discussions about Jefferson involves his religious beliefs. Some say he was a deist unaffiliated with any particular religion.  Doubting Thomas? The Religious Life and Legacy of Thomas Jefferson by Mark A. Beliles and Jerry Newcombe ($29.99, Morgan James Publishing) will put to rest all the doubts raised in the past. For example, during his presidency, Jefferson attended church at the U.S. Capitol Building’s Supreme Court chambers where a public service was held. This is contradiction of the assertion that he believed in a strict separation of church and state. This book is based on extensive documentation, often providing little known facts based on his letters, as well as his relationships and activities with religious communities. It is an absorbing read and it is supported by The Selected Religious Letters and Papers of Thomas Jefferson ($29.95, America Publications) edited by Mark A. Beliles. It offers more than fifty Jefferson letters and other documents never before seen in print. The enemies of religious belief and expression in America will not want you to read either of these books.

——–Excerpt of the book found in www.insidethepew.net

Excerpt from ‘Doubting Thomas?: The Religious Life and Legacy of Thomas Jefferson’

Editor’s note: This book excerpt is the first in a series that will focus on the religious legacy of the United States’ third president, Thomas Jefferson. “Doubting Thomas?: The Religious Life and Legacy of Thomas Jefferson” (Morgan James Publishing, Nov. 4, 2014) is co-authored by Mark A. Beliles, Ph.D. and Jerry Newcombe, D.Min.

Thomas Jefferson was a complicated man, especially when it comes to religion.

MEMBERSHIP AND WORSHIP ALL HIS LIFE

Despite Jefferson’s late unorthodoxy, he maintained his support and attendance with orthodox Trinitarian CHURCHES

(when available) his entire life. (He once described 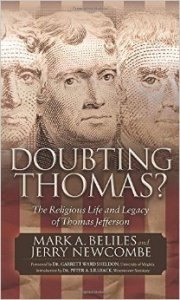 himself as a lifelong Episcopalian; but for two periods that type of CHURCH

does not mean he attended its services, but the overwhelming testimony of so many diverse observers clearly testify that he did so. For instance, Margaret B. Smith describes his eight years in Washington by saying: “Jefferson during his whole administration was a most regular attendant [at church in the Capitol].”[1] His political opponent Manasseh Cutler confirmed the same during those years—and even use the phrase “ardent zeal” in reference to Jefferson attending CHRISTIAN

services there. And Jefferson’s overseer at Monticello said of Jefferson’s retirement years that he never missed a chance to hear any preacher that came along. (This was even during the period before the Episcopal Church started back up in Charlottesville.) His family members and neighbors confirmed the same for his retirement years. And never once did any of his local pastors nor any other person in Williamsburg, Richmond, Philadelphia or Washington mention that Jefferson refrained from attending church or taking communion and participating in the weekly recitation of the Apostles’ Creed. On the positive side are many comments from the same, noting his attendance. In short, Thomas Jefferson was a committed, life long churchman.

Let’s review some of the other highlights of his personal pro-faith religious life:

Yet there was also evidence of doubts beginning with the 1788 letter, where he declined being a godparent because he did not understand the Trinity. But there was no subsequent evidence of a separation or withdrawal from Trinitarian CHURCHES

. Despite the influence of Rev. Joseph Priestley and Unitarian friends, Jefferson claimed he did not turn away from the CHRISTIAN

But after ten years more, in private—never public—he began to clearly express more unorthodoxy in his views. From about 1813 onward, Jefferson’s own words show a desire to promote a “restored” CHRISTIANITY

(that jettisoned the doctrine of the Trinity). In these later years there are several letters clearly identifying himself as an Episcopalian and a CHRISTIAN

(but in a non-creedal way). He said he could never be an atheist, and never once called himself a Deist. In his last year he called himself a Unitarian for the first time. Like many of the Restorationist believers in his area and like Unitarian Rev. Joseph Priestley, he believed the Scriptures had been corrupted over time, but his long-time pastors thought it was intellectual playfulness in the closet. Their perspective hopefully has been introduced through this book as a legitimate way of interpreting Jefferson’s personal faith.