The other day I worshiped Jesus in the National Cathedral. I don’t think Jefferson (author of the phrase “separation of church and state”) would have a problem with that. He regularly worshiped Jesus in the US Capitol building on Sunday mornings. Someone might say, “But what about the separation of church and state?” Well, the founders including Jefferson wanted to avoid establishing a national denomination, as they had in England, in France, in Germany, etc. No state-churches.

Our National Cathedral was opened in 1907. Think about it—having a “National Cathedral.” Hmmmm. Our 28th president (Woodrow Wilson) is buried there. I hadn’t known that until our visit. Bottom line: Jefferson’s view on church and state is far different than today’s view, which—as we point out in DOUBTING THOMAS—is often akin to “state sanctioned atheism.” 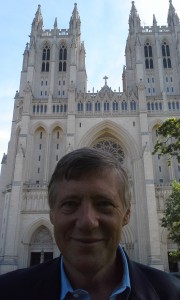 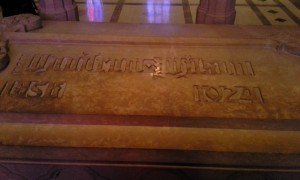 Pictured above is the sarcophagus of President Woodrow Wilson, who died in 1924. I hadn’t realized any president was buried in our National Cathedral, until I stumbled across his grave.