Home Jerry's Blog Jefferson’s School (the U. Va.) Was to be Non-Sectarian, Not Secular

Jefferson’s School (the U. Va.) Was to be Non-Sectarian, Not Secular

Thomas Jefferson entertained doubts later in life, but he was not a lifelong skeptic. In our book Doubting Thomas, we see that the school Jefferson helped to create (the University of Virginia, which is in Charlottesville) was not so much a secular school as it was a non-sectarian one. Jefferson did not believe in the modern notion of kicking God out of the public square.

Jefferson wrote a letter in 1817 with references to God’s providence to Harvard professor George Ticknor which said: “…The penance he [i.e., Napoleon Bonaparte] is now doing for all his atrocities must be soothing to every virtuous heart. It proves that we have a God in heaven. That he is just, and not careless of what passes in this world.”

The central focus of Jefferson’s retirement years was the establishment of an institution of higher learning. It began with his service a few years earlier on the board of the Albemarle Academy, a private nondenominational Christian institution that was renamed the Central College. Now on July 28 the Board of Visitors of Central College met under the leadership of Jefferson and the minutes record that: “It is agreed that application be made to Doctor [Rev. Samuel] Knox of Baltimore to accept the Professorship of Languages, Belles Lettres, Rhetoric, History and Geography.” This Rev. Knox was the Presbyterian minister who had corresponded with Jefferson earlier (and who had suggested the idea of a non-denominational college having no divinity professor). However, due to a miscommunication, Knox did not receive or respond to the offer in a timely fashion, so by the time he responded the private college became a public state university with a new protocol for hiring professors.

The second offer of a professorship was on September 1, 1817, when Jefferson wrote to Unitarian chemist Thomas Cooper: “…Charlottesville is…free as air in religion and politics. Fanaticism and Philosophy have their equal scope, on the principle that de gustibus non est disputandum [i.e., In matters of taste, there can be no disputes] and I believe that a moral lecturer, on Sundays, would be as well attended, and paid, if he would add a rational prayer, as a brawling presbyterian or baptist. I have been thus particular, because I am very anxious you should come and give us the benefit of your aid in making this seminary the first in the Union, and drawing to it the youth of the other states…”

The board met on October 6, 1817, and the Minutes of Central College show that they approved the program in advance for the laying of the cornerstone of Central College (later known as University of Virginia). The minutes included a pre-approved prayer and Scripture reading as follows: “…May almighty God…bless this…College, the object of which institution, is to instill into the minds of Youth…the love of religion & virtue.” The Scriptures that were preapproved in the Board’s minutes to be read at the ceremony were: “Thus saith the Lord God, behold I lay in Zion for a foundation a stone, a tried stone, a precious corner stone a sure foundation, — Judgment also will I lay to the line, and righteousness to the plummet [Isaiah 28:16-17]; for behold the Stone which I have laid before Joshua, upon one stone shall be seven eyes: behold I will engrave the engraving thereof saith the Lord of Host [Zechariah 3:9]; bless Ye the Lord, all ye servants of the Lord lift up you hands in the sanctuary and bless the Lord; the Lord that made heaven & earth bless thee out of Zion [Psalm 134:1-3].

Episcopal Rev. William King of Staunton led this religious portion of the Masonic ceremony in the presence of Jefferson, Madison, and Monroe who had approved it all. One day after the cornerstone ceremony, the board met and said: “On information that the Rev. Mr Knox formerly thought of for a Professor of Languages is withdrawn from business the order of 28th. July is resumed, and it is resolved to offer in the first place the Professorship of Chemistry &c to Doct [sic] Thomas Cooper…” So when the public learned Cooper the Unitarian (and an aggressive one at that) was hired, and never knowing of the offer to Rev. Knox, this combination of events created an impression that unorthodoxy would be favored by the university. It became a public relations disaster with its evangelical supporters.

By the fall of 1818 Jefferson’s private Central College was on its way toward becoming the state’s University of Virginia (but not chartered as such until January 1819). On August 4, the commissioners for the university made their report for the legislature. This is treated more fully in a later chapter on the university, but below is a quote from this Report: “…It is supposed probable, that a building of somewhat more size in the middle of the grounds may be called for in time, in which may be rooms for religious worship, under such impartial regulations;… we have proposed no professor of divinity; and the rather as the proofs of the being of a God, …will be within the province of the professor of ethics… Proceeding thus far without offence to the Constitution, we have thought it proper at this point to leave every sect to provide, as they think fittest, the means of further instruction in their own peculiar tenets.”

This report is significant in that it affirms the use of buildings for Christian worship and the teaching of the existence of God as being constitutional actions in this state university.

Note: the picture by Jerry Newcombe is one of the archways at one of the entrance-ways to the University of Virginia. There in stone is a quote from the Bible, from the book of Proverbs. 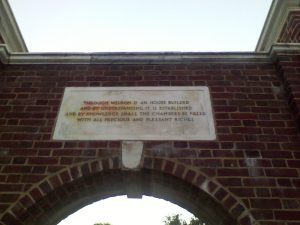