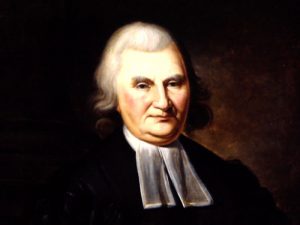 [The picture here is of Rev. John Witherspoon, president of Princeton, who is referenced in this article.] The actual life of Thomas Jefferson, especially in the first half of his time on earth, was more as a believer in Jesus than an unbeliever. He learned much of the Scriptures. He donated generously to Christian causes. He attended church regularly. Later in life, no doubt, he developed some serious doubts about core Christian doctrines that he shared privately with others, e.g., John Adams. In the 1790s, when he was in his 40s and 50s, he essentially lived as a professing Christian.

Early in 1791 Jefferson wrote a letter to his son-in-law, Thomas Mann Randolph. In it Jefferson rejoiced in the birth of a new family member and quoted a verse from the book of Psalms from the Bible in doing so: “I congratulate you sincerely, my dear Sir, on the birth of the little daughter. ‘Happy the man, in the scripture phrase, who hath his quiver full of them.’” Jefferson then went home for a visit between September 3 and October 21, 1791. A letter to Rev. Matthew Maury mentioned a donation to his home church on October 25: “to Revd. Matthew Maury 75.5 Dollars.” (Keep in mind with such donations, that to approximate what that would mean in today’s dollars, we need to multiply by over 20 times. In our book, Doubting Thomas, we document how incredibly generous Jefferson was to explicitly Christian causes. This includes many private donations, not known to the world at large.) More money was given on November 4, 1792, to “Revd. Matthew Maury.” Some of these expenditures were for church work and some for school fees of Jefferson’s dependents.

Back in Philadelphia, Jefferson also writes to Presbyterian Rev. John Witherspoon, as he did a decade earlier to request him to provide a teacher for a school in the Charlottesville area “in hopes that your seminary, or your acquaintance may furnish some person, whom you could recommend as fitted to the object…” John Witherspoon was a devout Presbyterian. He was the president of Princeton, which in those days was solidly Bible-based. Witherspoon is the clergyman referenced in the famous statement from one of the British politicians in those days: “Cousin America has run off with a Presbyterian Parson.” This was during the time that conflict was brewing between the Mother Country and the 13 colonies. Meanwhile, Jefferson sent an earlier (January 12) letter to Rev. Witherspoon to recommend a student for enrollment in his seminary at Princeton, and another on June 3 and July 29 asking for teachers to come.28 To Rev. Needler Robinson, Episcopal minister in Chesterfield County, Virginia, Jefferson sent a letter, saying that he “inclosed to Mr. Baker for you a letter from Dr. Witherspoon.” The narrative that Thomas Jefferson was some sort of lifelong skeptic of the Christian faith does not hold up to the facts.

His account book also reveals that Jefferson “Paid. Mr. B[___]et* a subscription for missionaries” near the end of 1792. This support of missionaries is interesting because it begins to emerge in various correspondence at this time between Jefferson and Rev. Samuel Miller. Miller was a Presbyterian minister who Jefferson may have met earlier when he was in New York.

*It is difficult to make out the proper last name here.